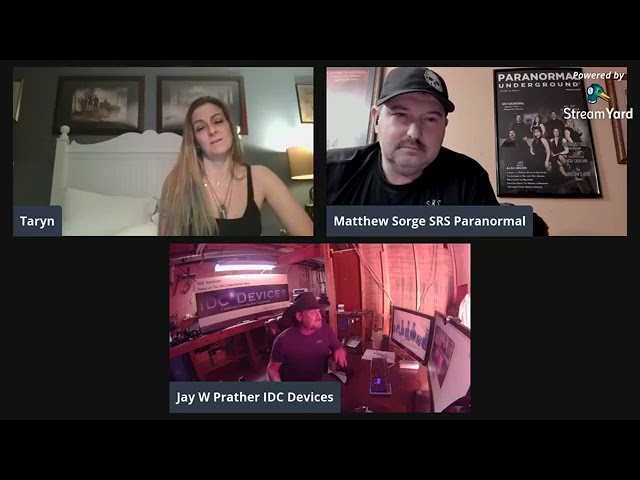 Ghostly Guest Pulling for My Attention

Jay W. Prather IDC Devices- is the owner, founder, designer, and builder for IDC Devices paranormal investigative equipment, with over 30 years of experience working with electrical components and electronics; he has been creating personalized, paranormal equipment since 2010. Jay W. is not your typical equipment builder, though. His equipment is experimental and meant for seasoned investigators that focus on data, research, and correlation among different techniques used in an investigation. Jay W. is the creator of the IDC InterComm Box and IDC Direct-Linc, that has been featured on many popular paranormal TV shows both here in the U.S. as well as abroad, including Ghost Adventures and Haunted Towns with the Tennessee Wraith Chasers.Matthew Sorge SRS Paranormal-Raised in a traditional Catholic family he was drawn to the family business following in his brother’s footsteps. Matthew became a Professional Firefighter in 1994 and for over two decades has had the honor of helping others in their time of need. After an unexplained paranormal encounter, he became compelled to seek the truth. Matthew had an overly healthy skepticism towards paranormal phenomena, determined to prove it is people who cause these unexplained events, not the supernatural. He began his quest for answers of the unknown and unexplained, which quickly grew from an interest into a passion for paranormal research. He brings a tech-savvy, analytical, and methodical approach to his research and the team, driven to find answers. His journey over the years of investigation has taught Matthew that paranormal phenomena not only exists, but has an impact on those who encounter it. Leaving him with more questions and new theories, only fuels his passion to seek the truth and push the boundaries and limits of his research. Matthew is a sensitive and continues to grow into his own abilities to communicate with spirit. He is always ready for an adventure along with an interest in photography and videography; Matthew is always prepared and ready to document whatever is happening. A dedicated family man who resides in East Tennessee, loves spending time with his family, studying paranormal theory, metal detecting, and preserving history for future generations… Follow Matthew on his social media Facebook: @matthewsorgesrs, Instagram:@matthewsorge_srs , and Twitter:@matthewsorgesrs